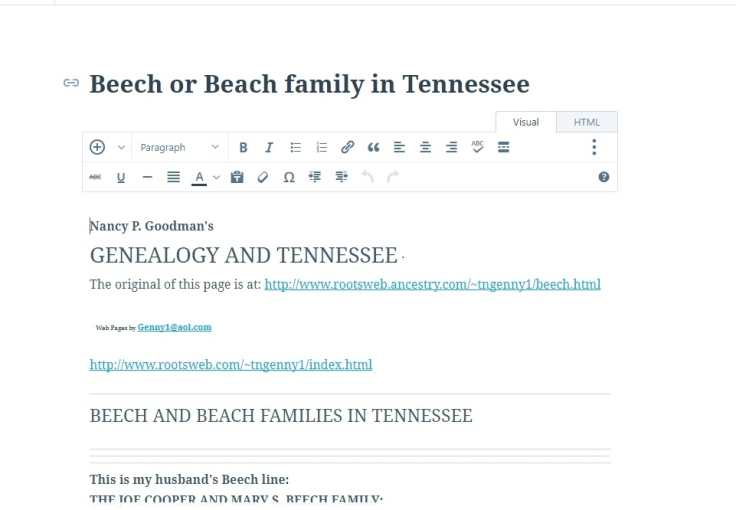 Nancy P. Goodman’s
GENEALOGY AND TENNESSEE ©
The original of this page is at: http://www.rootsweb.ancestry.com/~tngenny1/beech.html

BEECH AND BEACH FAMILIES IN TENNESSEE

This is my husband’s Beech line:
THE JOE COOPER AND MARY S. BEECH FAMILY:
Send email to me at: Genny1@aol.com if you are connected to this family
FIRST GENERATION

1.  Joseph William “Joe” COOPER was born in 1835 in Virginia (Cooper’s Ferry, VA?). Died in 1892 in Nashville, Davidson Co , Tennessee. Buried in Buchanan Cemetery; Elm Hill Pk;Nashville. (From Franklin Tennesse? orginally from Virginia?.)
Cooper family may have been in Maury County; and orginally may have been from “Cooper’s Ferry”, Virginia, according to Mae Osment Webster.
One note I have says “Cooper family was in Franklin TN.”, but I have not been able to make any connections with the Cooper family there.
Joe Cooper married Mary Simphronia BEECH. Mary Simphronia BEECH [S1] was born on 12 May 1860 in KY. Mary S. Beech was 10 years old when admitted to the St. Mary’s Villa Catholic Orphanage on September 4, 1870. She was dismissed on May 4, 1872 to John Lewis of Pulaski, TN. Died on 5 Aug 1941 in Nashville, Davidson County, Tennessee. Buried in Donelson Church of Christ Cemetery.
REFERENCE: SOURCES St Mary’s Villa; Catholic Orphanage; 30 White Bridge Rd; Nashville, Tn. Phone 615 352-3087. In phone conversation, the information was obtained concerning the three children of Lilah LEE and Lawson BEECH (Mary S. BEECH; Susan Beech & Sydney Beech).
When asked if a photocopy could be made of the record, the person on the phone said “the book is too big and too old to make copies of.”

11. Hugh Woodall COOPER. Hugh married late in life, at about 50 years of age; no children. He married Mattie Pearl AKIN.

Send email to Nancy P. Goodman at: Genny1@aol.com
Return to my GENEALOGY AND TENNESSEE web pages at:
http://www.rootsweb.com/~tngenny1/index.html